Today,we’re  joined once more by our special guest blogger Jimmy Ray Flynn! Jimmy, as many of you know is a talented writer and artist who originally hails from the great city of Boston, where the three most important things in people’s lives are Sports, Politics, and Revenge! Please welcome Jimmy back to SMS and enjoy his insightful and unique observations about the music and culture that was born and raised on the “West Coast”

February 9, 1964. A watershed moment in music history as The Beatles performed on The Ed Sullivan Show for the very first time. The British Invasion was well underway in America. As a young lad, growing up on the streets of Boston, I was immediately hooked. “She Loves You, yeah! yeah! yeah!”

However, what seemed like a million miles away to the west, in sunny Southern California, something else was happening that soon enough had me singin’ a different kind of tune and opening my ears and eyes to a whole other music experience. “Don’t Worry Baby, everything will turn out alright”

I’ll never forget hearing The Beach Boys classic on my little transistor radio for the first time in the spring of ’64 (It’s hard to believe this song was the B-Side of “I Get Around” yet it’s true) All of a sudden I could close my eyes and was magically transported to another place and time. Heaven on earth. Brian Wilson totally captured the essence of what was happening between a guy and a girl as they discovered the spark that made life such a fine adventure. A simple love song. Great harmonies, along with lyrics that painted a sweet picture of two young lovers and a car. His car. I was hooked again.

The surf culture and the trappings that came along with it were an irresistible force of nature for a guy like me. The music, the movies, the chicks! Sunshine and sandy beaches 24/7. All the rest. What was not to love?

The MUSIC in sharp contrast to the sounds coming out of Merry Old England were All American through and through. Besides The Beach Boys there were Dick Dale (King of the Surf Guitar) and The Del-Tones “Misirlou” (which most of you contemporary cats recognize from Quentin Tarantino’s “Pulp Fiction”) Jan and Dean “Surf City” (Two Girls for Every Boy) The Chantays “Pipeline” The Trashmen “Surfin’ Bird” (Papa-Oom-Mow-Mow)The Surfaris “Wipe Out” and a tasty little favorite of mineby The Sunrays “I Live for the Sun” produced by Beach Boy Dad, Murry Wilson. How about you? What was your favorite surf song?

As I wrote in a previous SMS article: Sixties Summer Memories on Old Cape Cod, I was fortunate enough to spend my summers in a place that was a Southern California cousin of sorts. So it became a natural progression to embrace those groovy things which were kinda new to me.

Skateboards, for example. Man, I believe it was the time my mother took us shopping at King’s Department Store in Hyannis (the same day that I bought the 45 for “Don’t Worry Baby” “I Get Around”) that she got me my first skateboard. Now here was a real challenge trying to ride this thing with it’s tiny metal wheels on concrete sidewalks or asphalt parking lots. Hey, it wasn’t exactly surfing ten foot waves at Waimae Bay but it was still crazy fun!

Speaking of FUN. Rat Fink. A funky creation from the mind of Ed “Big Daddy” Roth, Rat Fink was a fixture in the Southern 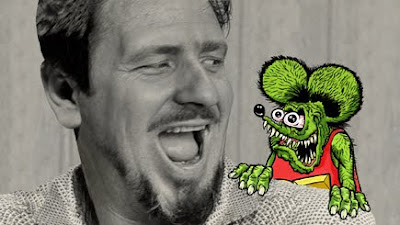 California Custom Car Culture. He appeared in everything from T-Shirts, Revell plastic models, beach towels, comic books, you name it. I had more than my share of Rat Fink items which seemed to almost always bug my mom and dad. Oh well…

Seeing the “Beach Party” movies with Frankie Avalon and Annette Funicello was another happy time. An absolute gas! My parents would load my brothers and I up in our station wagon for a night at the local drive-in to watch Cali kids having fun in the sun. So many crazy titles “Muscle Beach Party” “Beach Blanket Bingo” “How to Stuff a Wild Bikini” just to name a few. Pure Camp. Loved them!

Although, I gotta admit my favorite beach movie guilty pleasure of all time is “Ride the Wild Surf” which starred Fabian, Shelly Fabares (major girl crush from “The Donna Reed Show”) Tab Hunter, Barbara Eden (“I Dream of Jeannie”) and as the bad guy-surfer king pin “Eskimo” Jim Mitchum (Robert Mitchum’s oldest son). Seeing this film, in 1964, for the first time at the Coolidge Theatre was an absolute joy for me. It’s so corny it’s COOL. An added bonus was Jan and Dean’s performance of the title track written by Jan Berry, Brian Wilson and Roger Christian. If you’ve never seen it, I highly recommend giving it a gander. 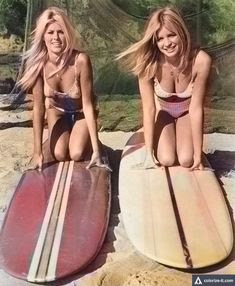 Which finally leads me to my most exciting and pleasant memories of Southern California Surf Culture, The GIRLS. Chicks, baby! There was no other song that came close to painting a picture of what it was about than The Beach Boys classic “California Girls” in 1965. No matter where you were from, East Coast, The South, Midwest, The North, anywhere else on the planet, for sheer head to toe gorgeousness the girls from Southern California set the bar very high. Tanned beauties who were the fantasies of many young men including yours truly. If that wasn’t enough to make a Boston Boy want to pack up his kit bag and move out to the west coast, well then…Here I Am.

Ten Days That Shook The World: The Ballad Revolution of 1960