You probably know plenty about “The Monkees, aka “The Pre-Fab Four!”  But do you know how it all got started, and who else showed up for the audition?   It all began on this day Sept. 9th 1965, when the shows soon to be producers, placed THIS AD in Daily Variety in the summer of 1965! 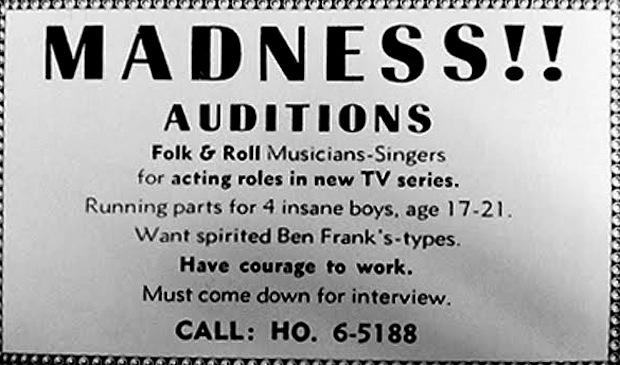 Yep! That’s how it looked and within a few day’s, 437 wanna be’s, hippies, starving musicians and out of work actors flooded non stop into the offices of producers Bob Rafelson and Bert Schneider! You know the names of the four guys who ultimately got the gig, but you may be surprised as to who else showed up and waited in line on a hot Sept. day in L.A.   At the time Peter Tork and Stephen Stills we’re roommates, and it was Stills who saw the ad and ran down to audition, when he failed ( according to the producers, they thought his hair and teeth would’n’t photograph well ), Stills convinced his roommate to try out ! Peter’s interview went much better.  Same thing goes for the great Harry Nilsson! The list goes on to include our friend, genius and Brian Wilson collaborator/ songwriter Van Dyke Parks. Pop songwriter Paul Williams! As well as future “Dog” from “Three Dog Night” Danny Hutton. Some music historians claim David Crosby auditioned, and it’s possible as he and Stills were quite close, but we ain’t buyin’ It!

However, we believe the list includes more names you’d recognize, but as The Monkees became “Uncool” fewer serious artists would admit to it. And here’s a little Monkee Irony, Stills, Crosby and NEIL YOUNG all played on Monkees records, and The Monkees recorded songs by NIlsson and Paul Williams!

Lastly, another Monkee factoid that gets a bit lost in Monkee history is the fact that the Pre-Fab Four were out of work and complete unknowns! Not completely true. Mickey Dolenz had early success as an actor starring in a popular series in the 50’s called “Circus Boy” produced by his father. Michael Nesmith had signed a music publishing agreement with Screen Gems music and was making records under the name of Michael Blessing, and it was during this time that he wrote the song “Different Drum” which would eventually become a huge hit (post Monkees) for Linda Ronstadt and The Stone Ponys’! Davy Jones was far from anonymity. He had appeared in a number of shows in London’s West End, including “Oliver,” and here’s another Pre-Fab Four bit, Davy appeared on The Ed Sullivan show, as part of the original cast of “Oliver” on Feb 9th 1964, the same night The Beatles performed. Lastly, Davy had recently signed a record deal with Colpix Records, and they were preparing Davy’s debut album when he got the job as a Monkee! Peter Tork may be the only Monkee Who was truly unknown and out of work, although, being from the east coast he worked constantly at small clubs and coffe houses, in Greenwich Village mainly playing banjo frequently performing with John Sebastian and gained the respect and friendships with the likes of Crosby Stills and Young, et al.

At this point, we’d usually cue up a Monkees’ classic, but not today, today we’re going to listen to a lessor know tune called “You and I” from The Monkees album “Music Box” Here it is featuring Stephen Stills and  Neil Young on Guitars!

and people say they Monkee’d around?

P.S. There is a reference for “Ben Frank types” in the Daily Variety ad and just in case YOU never hung out there, here’s the deal, Ben Franks was a diner, not just a diner but THEE quintessential So. Calif. diner featuring classic 60’s architecture, waitresses with attitude and a menu anyone could afford and enjoy! Located ion the 8200 block in the heart of the Sunset Strip, less than a block from the L.A. offices and studios of PLAYBOY magazine! Everybody met and hung out there, including all the gents mentioned in our article and various models and young actresses! Hey Hey, indeed!

Didja ever hang out there?

“Take me on a trip upon your magic swirling ship”

“You were in a car crash and you lost your hair”